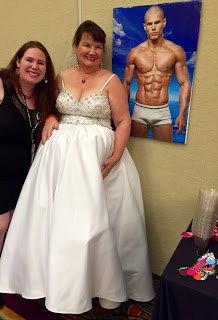 I can’t tell where the idea came from to dress up as a pregnant bride, but before I knew it, I was in a bridal store, buying a beautiful gown on sale, with my husband of 44 years. It was so funny how the owner of the store, a man, came up to us, smiling.
“When’s the big day?”
“Oh, we’ve had it,” Don said.
The owner didn’t quite know what to say.
“It’s a costume. We’ve been married 44 years,” I said. I was thinking to myself, as I stood in this beautiful white satin dress with beaded bodice, I’d never owned something so nice. I didn’t really have a wedding dress, although the one I wore those 44 years ago I made myself. I also made Don’s shirt. I was stitching the buttons on it as he was racing to the wedding site. But now, after 4 children and 44 successful years of marriage, I was finally buying a wedding dress.
My husband was beaming and gave me a big kiss. “You look prettier today than you did back then,” which was something this lady can never hear enough.
“You okay with this?” I asked him.
He shook his head, and with that twinkle in his eye, said, “Am I going to be able to stop you?”

Of course, the answer was no. “Well, I’m using my money from my book sales.”
“I know that. It’s yours to spend however you want.”

The Russian lady who did my fitting asked me, “So when are you getting married?”
“I’m already married.”
(silence)
“I’m buying the dress for a costume.”
“Oh,” she said as she cinched up my bodice. It kind of hurt.
“I’m doing a book signing, and sponsoring a bachelorette party. We’re doing fun games. It’s a chance to have fun with readers, my fans, and other authors.”
“You do this book signing in a book store in a wedding dress?” she said in her thick Russian accent.
I knew I’d lost her.

Whether or not it was wise, I’m sure the moment was memorable. I’m sure people remembered me, and they certainly did have a good time. I missed the raunchy music, low lighting and some candlelight, but it was okay. There were no male strippers even though there had been rumors of such. But it was a photo op time. A chance to get WAAAAAY out of my comfort zone.

Like the time I drove to SFO in an MG with the top down (my roommate’s boyfriend drove me), dressed as a nun. I was going up to Portland to see a boyfriend who swore if I transferred to Santa Clara I’d become catholic. My friends in the dorm helped me “act nun” like walk leaning into the walls and to keep my eyes downturned. No one sat by me in the waiting area, or on the plane. When I walked past, people stopped talking. One woman came up to me and said, “Oh honey. You’re so beautiful,” like I should be making babies instead of helping the poor.

When TJ took pulled up to the SFO terminal, we happened to park behind a taxi full of real nuns. And because his door was broken, I had to climb out by standing on the seat and climbing over the side of the car. The nuns stopped and looked at me, and then went on.

Well, it would have been nice to have my cinderella dress and dance the night away to a full orchestra, doing big turns and waltzing until I dropped. I was looking forward to one nice dance, but that was not to be. Perhaps that will be another story. Now I just look forward to coming home to my prince charming, who has watered my roses, fed the dogs and been more than patient in my folly of the past few days. The wonderful thing about him is that he has learned to take me with a grain of salt, and to patiently wait until my feet hit the ground again.