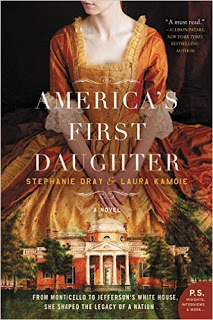 I’m reading a great new book co-written by one of my favorite authors, Laura Kaye, also known as Laura Kamoie for her historical books, America’s First Daughter. It is so fitting that this weekend, as we celebrate our nation’s independence, that we review some events that took place in the lives of key players at the birth of this new nation. This book is about Thomas Jefferson’s daughter, Patsy, and her relationship with her mother, her father, and the woman who was her blood relative who also became Jefferson’s lover, bearing several children for him, and remained at his side until his death, Sally Hemmings.

I have said over and over again the truth is stranger than fiction, and this story is no exception to that. The two authors researched over 18,000 personal letters written to and from Jefferson, and gives us a good glimpse of what it was like to live during those dangerous times. The details of their circumstances and the closeness between Mrs. Jefferson, and the slaves she “owned”, inherited from her father, all the while recognizing that some of them were her half-siblings, shows what a remarkable woman she was. Her daughter, Patsy, would come to know the playmate she had as a child, rumored to be her relative as well, become her father’s long companion after her mother’s death. To say this very public and important family had issues and secrets, is putting it mildly. The story, as told by the daughter, Patsy, is so riveting it plays like a movie and I forget where I am while reading it.

While I can’t begin to write a historical novel, I was first drawn to the book because I have a futuristic novel I’m currently working on, involving a direct descendent of Thomas Jefferson and Sally Hemmings. There are similar themes, such as the concept of Freedom, the price and meaning of Independence, and the true definition of Liberty. And yes, that’s all you’re gonna get today. You’ll be seeing some excerpts in the coming weeks and months when I’m ready to finish it. My tenative title, while I work on the story, is Free To Love.

They say circumstances don’t make a man, they reveal a man. What I enjoy reading, and writing, are stories that acquaint us intimately with characters who make decisions in a hopelessly flawed and dangerous timeline. Moral absolutes become sometimes life-threatening and compromised. Often the decisions are between the lesser of two evils than the difference between a shining star and a grease stain. I love the rich conflict of this story, and hope that some of that will rub off into mine.

America’s First Daughter helps me understand how precious our freedoms are, and appreciate the costs others who came before had to pay for that freedom I enjoy today.

Remember, evil exists when good men do nothing. If good men did nothing, we might still be a colony, struggling under the yoke of a controlling empire. Or, we might all be speaking German. Maybe with all the events happening this July 4th weekend, we would do well to remember that.

They say freedom isn’t free. Are you willing to pay the price? Some of us may have to. And some of us are innocents, but just like those who lived and died during the times of our young struggling nation. Not just soldiers paid the price. Their families and loved ones did too. And in the end, it was worth it.