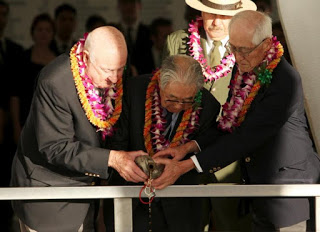 In February, I attended a writer’s conference in Hawaii, organized by the wonderful author, Violet Duke.  It was my honor to sponsor a tour of the Arizona Memorial. I’ve been before, but wanted to make it so others who hadn’t, got to experience it. December 7th is just three days from now.

Words do not do this beautiful memorial justice. I watched the peaceful waters of the bay, the oil still leaking from the Arizona herself, flowing out to sea, mixed with my flower lei I brought to honor those who served for me so bravely and paid the ultimate sacrifice. I really don’t get into the full holiday spirit until after this milestone is passed. Just like I don’t ever get to Thanksgiving without remembering 9-11 or the assasination of JFK. These are just points in my life I celebrate. And yes, I say celebrate.

The ones who are gone would want me to do so. I can’t bring them back, but I can make sure they live on forever. We came together during these huge times in our country’s history. All creeds and races, religions. Everyone knew where they were during that time, or remembered going back to visit the memorials if they were too young to remember the live event. We think about those gone, and vow they will not be forgotten. It’s our job, because right now, we are the living. Won’t always be so but for right now, we are.

I was struck again by the photographs of the young pilot, Setuo Ishino, who flew into the Missouri, and the military send-off he received, draped in a Japanese flag sewn by a crew of Navy kitchen swabs. The letter that was written to his parents, telling of his bravery. The men who saluted as he was returned to the sea. I see the other letters written by the other Kamakaze pilots to their parents before their missions, men who would be screwed into their cockpits for no escape. I saw the picture of his family when the boy was two, holding an airplane.

There is insanity in war. And there is decency and honor even in the worst of times. I am reminded of what someone said, “Circumstances don’t make a person. They reveal a person.”

My little part of this is only to help people remember what bravery and true honor really is all about. The selfless courage of common men and women, who do uncommon things. Things they never dreamed they would or could do, but somehow they just do.

And I say thank you to all who have served and are serving today.