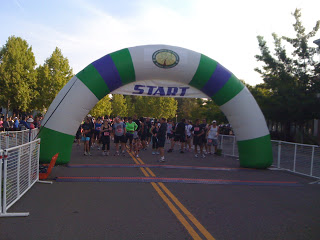 When I was a full time business coach, I used to tell my customers, you must be easy to start and hard to stop. Everyone thinks they start from way behind the curve. They’ve procrastinated and now when they have to start, they have to work through all the debilitating emotions of frustration and discouragement, before they can even begin their project.

And then there were those who wanted it all today, wanted to catch up in one sitting, who were so anxious to make headway, they too had to battle the range of emotions and frustrations that they felt held them back, due to their impatience. I often have that form of “startitis” – in fact, it used to plague me whenever I’d start a new diet. And the worrying over whether or not I would stick to it long enough to have results would overcome me and by 10 o’clock, the diet was blown. And then it makes it harder to start again.

But starting is just that, starting all over. My opinion is that it’s 80% of the battle, just beginning. If I can put out of my mind all the other little self-talk that is unproductive and just plain not true in many cases, I can get that big locomotive fired up and begin my new project. By “new” it could mean writing new or editing. Whatever the project.
I used to use the illustration of getting a big locomotive running. It doesn’t matter how hard we press on the pedal on that big engine. The thing will accelerate at a certain speed no matter what. If we’ve floored it and really jumped on the pedal (they probably don’t even have one, but I use it for illustration), that big machine would only go so fast in such a period of time. The extra effort on our part is irrelevant.

On the other hand, there’s this little thing called Momentum that begins once we are sailing down the rails. The weight of the machine and the forward motion help propel us further, even if we should temporarily take our foot off the pedal.

And that’s where people have the hardest time. After they start, they get some success, and do happy dancing all over the room, and then forget to get back to work. I’d have business leaders achieve a windfall month of profits and then take the rest of the year off, and wind up behind what they did the year before. We used to say that earning a huge commission check was the surest detriment to many people succeeding. Just ask lottery winners. They’ll tell you.
The magic happens in the not stopping. Notice there is no mention of talent. We all want to be so talented someone will come along and give us millions of dollars for that screen play, that novel, but in fact, the world doesn’t operate like that. Somehow, even though others have struggled, our path will be smooth and easy.

You will have a ten times better chance of dying in a commercial plane crash than winning the lottery. Chances someone will pay you $1M for your book? I’d say even less.
What about you? What do you do to get yourself started? How do you keep your momentum fired up?