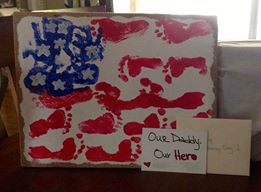 My father is gone, and every Father’s Day I get over to his grave to leave some roses from my garden, and at Christmas I like to bring him drumsticks so he can keep playing. Dad was an engineer, and looked about as wrong as wrong could be as a drummer, with his hair fringe, and jerky motions, and the fact that he had to bite his lip and frown because he concentrated so hard on keeping up with the beat. Like everything he did, even making music was hard work. But he loved hard work. Always did and I’m sure he’s working hard now.

What I learned from my father was how to survive. He was a very smart man. He did very well in school, but his childhood was marred by the fact that his own father suffered severely in World War I in battles in France, and basically came home mentally broken and eventually was sent to a state hospital until he could fight his way out. He never talked about his Dad’s trials, or the fact that he had to get up at one or two in the morning to sing hymns or those Tennessee Ernie Ford songs, and that his mother got up and played piano for him. It was just a fact of life.

His father wore pajamas all day long after he came home, and wore an apron, was the chief housekeeper and cook for the family, and Dad had many tales about those days. He’d come home, throw his books in the corner, and not return until dinner, then after dinner he studied into the night. It was his way of dealing with the unknowns of living with a parent who was mentally ill for most of his life, in an environment where he didn’t feel safe.

But Dad was never bitter. He loved his Dad. And as I was the oldest granddaughter, I loved him as well. Quirks, crying jags, days in the bedroom with the shades drawn and the arguments at the dinner table or the early morning songs my brother and I heard when we stayed there for a week at summer time, all seemed part of life. We took it just like my Dad did.

We were opposites in personality style. He would prepare and take copious notes. He hated to not know everything and so spent hours and hours researching thing. He once took apart our television set just because he wanted to see how it was made. He went to the dentist one time without novacaine so he could experience what that felt like. He was the perfect grandfather for my kids, even sliding down brown hills on our property on a cardboard refrigerator carton with the kids, and hitting a tree. He had to go to work the next day with a black eye. His commitment to the family was 100%.

As my mother was getting weaker from the ravages of cancer, he cut a fresh rose for her every day and brought it into her room. He took it as his job to take care of her those last 14 years of her life, and when she passed over, he was left without a job in life. Though my mother had gone, he was not ready to stop being a husband. So, at 80, my dad remarried, something none of us ever thought would happen and lived another ten years. I credit some of this to my new mom, Eunice, whom he loved with everything in his being, another testament, and another lesson to us all.

But the funniest thing I remember about Dad was a conversation we had at one of my son’s soccer tournaments in Davis. He’d gotten married the previous year. My mother had been buried in a plot in the lawn of our local Memorial Park. He’d bought the plot next to her, but now that he was married again, his priorities had changed.

He asked my permission to have my mother moved to the mausoleum, where he had a spot next to her, but the two of them would rest beneath his current new wife and her deceased husband. “Sharon, when I die, I’d like to be buried next to both my wives.”

I thought about it for a minute or two and then answered him this way, “I’m okay with it, Dad. But let me ask you this. Are you planning on getting married a third time?”

Forgive the use of some of these promo pictures, but they are some of my favorite father/daughter images and I thought you wouldn’t mind.

Happy Fathers’ Day. Hope you spoil him, or spoil him in your dreams.