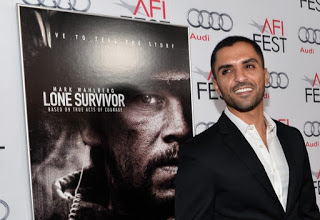 I have been funding part of this movie through Kickstarter. It is a project I believe very strongly in. If you want to read or listen to a very compelling story, listen to the audio book (which I recommend): Code Name Johnny Walker. It’s about the Iraqi interpreter who saved so many SEAL’s lives and a man whose hand I’d like to shake some day and say thank you. He was legendary for not only his dedication to the troops, the SEALs, but served at great cost to his own family. He now lives in the San Diego area, I believe.

Here’s a further update on this movie, and they have just cast the lead role, announcing it today. I’m thrilled.

Tell all your friends about this wonderful project and let’s all go and support it when it comes out next year. A true story that goes across religions, countries, loyalties, talks about love and family. This man loved his country and worked hard to save it. I know some day he’d like to go back and finish the job. But right now, we are lucky enough just to have been able to rescue him and hopefully keep him safe.

In my books, the interpreter is named Jackie Daniels. He appears in SEAL My Home and SEAL My Destiny, and again in True Navy Blue: Zak. All of these books are on audio.

One of the things I was most touched by was what he did on his first week back in the States. He went to McDonald’s and bought his kids hamburgers and milkshakes, using real US money. And on Sundays, he likes to go to flea markets just to see what Americans discard. I’m sure when he walks up and down the stalls, those people have no idea what a giant of a man he is and was.