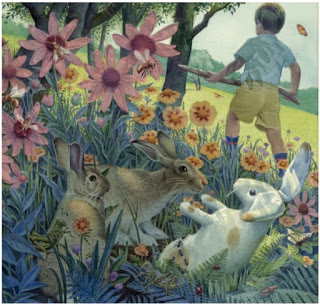 One of my favorite readings at this time of you, is a gift to you. Enjoy. May your Christmas be merry and bright, and your New Year sparkly and exciting. Thank you for traveling with me this year, and hope we stay connected in the years to come.

Excerpt, from The Velveteen Rabbit:

about it. “What is REAL?” asked the Rabbit one day, when they were lying side by side near the nursery fender, before Nana came to tidy the room. “Does it mean having things that buzz inside you and a stick-out handle?” “Real isn’t how you are made,” said the Skin Horse. “It’s a thing that happens to you. When a child loves you for a long, long time, not just to play with, but REALLY loves you, then you become Real.” “Does it hurt?” asked the Rabbit. “Sometimes,” said the Skin Horse, for he was always truthful. “When you are Real you don’t mind being hurt.” “Does it happen all at once, like being wound up,” he asked, “or bit by bit?” “It doesn’t happen all at once,” said the Skin Horse. “You become. It takes a long time. That’s why it doesn’t happen often to people who break easily, or have sharp edges, or who have to be carefully kept. Generally, by the time you are Real, most of your hair has been loved off, and your eyes drop out and you get loose in the joints and very shabby. But these things don’t matter at all, because once you are Real you can’t be ugly, except to people who don’t understand.” “I suppose you are real?” said the Rabbit. And then he wished he had not said it, for he thought the Skin Horse might be sensitive. But the Skin Horse only smiled.

The Skin Horse Tells His Story “The Boy’s Uncle made me Real,” he said. “That was a great many years ago; but once you are Real you can’t become unreal again. It lasts for always.” The Rabbit sighed. He thought it would be a long time before this magic called Real happened to him. He longed to become Real, to know what it felt like; and yet the idea of growing shabby and losing his eyes and whiskers was rather sad. He wished that he could become it without these uncomfortable things happening to him. There was a person called Nana who ruled the nursery. Sometimes she took no notice of the playthings lying about, and sometimes, for no reason whatever, she went swooping about like a great wind and hustled them away in cupboards. She called this “tidying up,” and the playthings all hated it, especially the tin ones. The Rabbit didn’t mind it so much, for wherever he was thrown he came down soft. One evening, when the Boy was going to bed, he couldn’t find the china dog that always slept with him. Nana was in a hurry, and it was too much trouble to hunt for china dogs at bedtime, so she simply looked about her, and seeing that the toy cupboard door stood open, she made a swoop. “Here,” she said, “take your old Bunny! He’ll do to sleep with you!” And she dragged the Rabbit out by one ear, and put him into the Boy’s arms. That night, and for many nights after, the Velveteen Rabbit slept in the Boy’s bed. At first he found it rather uncomfortable, for the Boy hugged him very tight, and sometimes he rolled over on him, and sometimes he pushed him so far under the pillow that the Rabbit could scarcely breathe. And he missed, too, those long moonlight hours in the nursery, when all the house was silent, and his talks with the Skin Horse. But very soon he grew to like it, for the Boy used to talk to him, and made nice tunnels for him under the bedclothes that he said were like the burrows the real rabbits lived in. And they had splendid games together, in whispers, when Nana had gone away to her supper and left the night-light burning on the mantelpiece. And when the Boy dropped off to sleep, the Rabbit would snuggle down close under his little warm chin and dream, with the Boy’s hands clasped close round him all night long. And so time went on, and the little Rabbit was very happy-so happy that he never noticed how his beautiful velveteen fur was getting shabbier and shabbier, and his tail becoming unsewn, and all the pink rubbed off his nose where the Boy had kissed him.