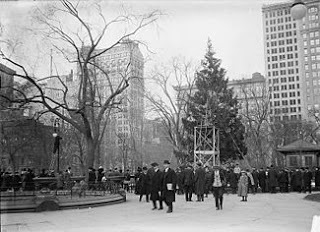 I am guilty, especially this year, of holding on to Christmas, perhaps a little too tight. I will be a mess the day we take the tree down and put away all the ornaments and decorations. I like to buy things after Christmas, and this year I haven’t done any shopping, except exchange for a jacket that didn’t fit my daughter. It’s a do-over.

I wish we could make Christmas a do-over. I have a lot of work staring me in the face in January.

I took a lot of days of rest this December, got well, emersed myself in family traditions, put on a big dinner with 38# of prime rib that was out of this world, gave some presents that were close to my heart. At the end of it all, I still wonder if I did enough. I know I shouldn’t feel guilty of taking a few private days for myself – watching Knick in binge mode, going to the movies twice and just watching as the Christmas lights danced in my grandchildren’s eyes. The bears were a hit and we got a beautiful video of all three Eastern Grands playing with them.

My dogs have eaten 3 rib bones already, and I’ve been lovingly vacuuming up white bone splinters here and there. My bedspread has paw prints on it and will have to be washed.

We wore ugly sweaters for Christmas morning breakfast, our tradition, and carried on the tradition of my grandparents some 90 years ago when they were a young newlywed couple. Forgive me if you’ve heard the story before, but here it is again.

My grandfather was a young preacher in Illinois, at his first church. Many of you know he started from a wealthy family in upstate New York, his mother was a concert pianist and his father was a “man of business.” They had racehorses and a beautiful home that stood above the Hudson River he liked to say the New York Stock Exchange was copied after. My grandfather was training to be a stock broker.

My grandfather witnessed a suicide, a man jumping from an office window, when he’d lost his fortunes. It had such an impression on him, he felt called to do something about it, and so began preaching in Madison Square Park. Yes, it was the park Madison Square Gardens was named after. As a child I was told it was, “On the corner of 5th Avenue and Broadway.”

Apparently it was known in the day as a kind of Speaker’s Park, where people could get up on a box and begin to protest or to preach. My grandfather became a well-known regular, and turned his back on his wealthy upbringing. A gentleman used to stop by and listen to him, later telling him he should get a degree and become a leader of a flock. He even helped pay for an education at the divinity school. Grandpa got involved in the Riverside Baptist Church, and became an ordained Baptist minister some years later. I can remember a picture of this church was on his wall.

His first church, then, was in Illinois. He’d already met and married my grandmother, an invalid he’d called upon, and with the help of his readings and the love of the handsome young preacher, she got out of bed and became his partner in all things. A woman who was supposed to die in her late twenties, she went on to bear two children and live to be 73 (outliving 3 of her doctors). I always loved hearing that story, because it read like the Brownings.

That first Christmas they were snowed in, and Grandma wasn’t able to go out and get the shopping done for Christmas dinner. All she had were eggs, canned pineapple rings, and some sausage. She made a dinner, using red and green sprinkles on the pineapple rings, served the sausage and eggs and her famous fresh biscuits. And that has become our family traditional Christmas morning breakfast ever since.

When we went back to visit the 9-11 memorial some years ago, and to visit our son, then attending NYU Film School, my husband and I sat in the park, and yes, I could hear my grandfather’s words echoing in the distance, bouncing off the faces of now-famous buildings, one of them the Flatiron Building. I felt the connection to my past, his past.

Maybe this year we’ll leave up all our decorations until Easter, like we did one year, until my youngest burst into tears and told me he couldn’t invite over his friends because “our Christmas Tree is still up.”

Yes, I am guilty of holding on too much. I never give up on a good story, or a memory. I never forget that who I am today is the result of those who came before me and who gave their life’s stories, customs, and history.

But I don’t have to worry about it today. I have a book to write, a book to finish, and it’s a long time before Easter.