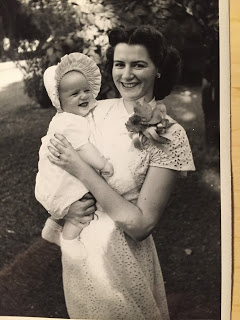 I was baptized on Easter Sunday. Not sprinkled. Dunked. When you are raised Baptist, nothing short of the full-on emersion service will do. We’d been studying for weeks, memorizing Bible verses and creeds, learning all the things we needed to know about our church, its history and why being baptized was a good thing.

The Bible story is all about renewal and forgiveness, our sins being washed away and the fresh start to life that is promised for those who follow the Christian faith. I know there’s a lot of pagan history surrounding Easter, but since I’m not a scholar, I’m going to limit my discussion to what I know.

The rest of the story, as they say, was that I had a terrible, hopeless crush on a boy who lived around the corner from the church. He was also  in the new membership class. We were both about ten years old. I had a hard time looking at him for fear of fainting. If he noticed me at all, I would be surprised.

He was tall, dark and handsome, just like the bad boys in my dreams who would steal me away. I imagined all sorts of miraculous things about him, but the truth was, I never really knew him. Years later I would run into him in the hallways of our different high schools and I would confess to having had a crush on him for three years running. His answer was simple, like it always was:  “I don’t remember you.”

That special Easter Sunday, we had to walk down the church aisle in our white robes, the girls with a small plastic daffodil, and the boys with a palm frond. We also carried our pristine white washcloth which would be used later on.

The choir sang as we lined up, and, sure enough, as the boys and girls converged at the back of the narthex, one by one we were paired and guess what? I was Richard’s partner.

It was surreal. Even then I was a romantic. I held my yellow daffodil like it was a wedding bouquet and Richard was my groom. Our legs touched a couple of times. His shoulder rubbed mine. Did his body buzz like mine did? Probably not.

At the altar, we separated to go up and around the choir loft to enter the Baptistry. My father’s cousin was the paster of our church, and the good Dr. had me say my name, and, after handing him my folded white washcloth, he placed it over my nose and mouth and bent me back, down into the water. Of course I lost my footing and splashed, and came up coughing, which caused a little ripple of laughter from the church. I was the girl who forgot her lines at Christmas when my job was to recite the Christmas story by candlelight. I was also the one who threw up in the choir loft because I sat next to Richard one Sunday and our thighs actually touched. I couldn’t handle the excitement, so I threw up. I’m the one who gave my shiny silver dollar to the poor African kids we saw in that movie they played – the kids with the bloated bellies. My dad replaced it with a paper bill, and gave me back my silver dollar with, “It’s nice to give the dollar, but you didn’t have to give that special dollar.” He had brought it back from Reno when he took the college kids skiing the weekend before.

Now you would think Richard would have remembered me. Or maybe he just tried to forget me, which is more likely the case. But each encounter was rather cathartic for me. It was, in many ways, a fresh beginning each time I went to church, as I learned to anticipate our meeting, learned to handle the proximity to him, and then deal with my blood pressure going back to normal.

Those were magical days. My parents had always said you “had babies with someone you really love.” I used to go to bed at night dreaming I was pregnant – a testament to how much I loved him. My simplistic view of that whole thing was dashed one evening in my parent’s kitchen and life was never the same afterwards. All because I came home and asked what that four-letter word beginning with a F was. My life was over as I knew it. Why would anyone let a boy pee on them, or inside them – wherever that place was. I didn’t even know it was there! And I knew it was wrong to find out.

Many, many Easters have gone by as I’ve raised my own four children, and now watch my grandchildren. I couldn’t convince any of them to get dunked, so I think I’m still the special one in the family. I had my third child on Easter Sunday. It was and always has been a day to mark a new milestone in an ordinary life filled with love and family and friends.

The message of new beginnings is just as timeless as it was way back then when I was so distracted. A friend once said I needed to put my arms around that little girl and just love her. There was never enough love. I was never confident enough. But there’s satisfaction in remembering the cycles of life and how even an awkward girl of ten could grow up and tell love stories. I’m still walking down aisles with flower bouquets and my heart goes pitter-pat for all the heroes in my books.

Because true love does indeed heal in the gardens of the heart.