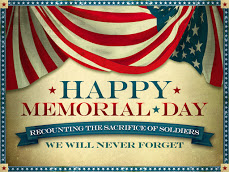 Memorial Day took on a whole new meaning the first time my son was deployed overseas. We weren’t told where he was going, when he’d be back, and, because of the outpost he would be sent to, communication would be nil.

I found great comfort walking the paths at Santa Rosa Memorial Park, seeing all the beautiful flags posted by the local Boy Scouts on the grave of every veteran. I watched as the newly interred were honored, their families given a folded flag, and a salute from an the Officer doing the officiating that day. One of my friends had lost his son just a few days before. His grave was still covered in flowers and wreaths.

We had protestors too that day, with their nasty signs inappropriately displayed, written comments meant to send distress to this young warrior’s parents. If it wasn’t for the beefy bikers who do the angel runs, picking up the coffins from San Francisco and escorting them up Highway 101 in a solemn parade of pride, the parents might have seen the disgusting message. I was glad they did not.

Just like every other mother who sends her son off to war, I thought about how I would act if it was suddenly my turn to show up at a ceremony like this. I hoped I never would. And so far, he’s been safe.

When my son decided to serve, I admit trying to talk him out of it. That was the job for someone else’s boy to do. I even harbored the thoughts that perhaps his talents in sports and leadership would be wasted on a battlefield. What parent hasn’t thought the same. I’m not proud of it.

But as he stood steadfast, unwavering, waiting for me to come around, I saw in him not the boy I raised but a man who wanted to serve. I didn’t want to take that away from him. And so I honored him with his decision, by deciding then and there, I’d be a willing participant and serve alongside him. I would support him as best I could.

It is an incredible thing to put on a uniform and selflessly serve a nation or an administration that you don’t always agree with. But regardless of politics, background, race or religion, the military man or woman serves by setting aside their today for our tomorrow. We can be sad about the ones who don’t come home. But they’d want us to live our lives and be grateful for the freedoms we have.

And to remember, not just on Memorial Day, or R.E.D. Fridays, but every day. With all the turmoil and nastiness out there today, it is truly a miracle, washed in the blood of those who have sacrificed, that we get to live the life we have.

May your grateful nation always remember you, veterans in peacetime and in war. And say thank you for your gift of freedom.