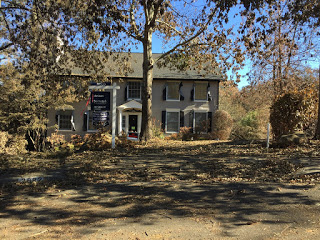 Many of you familiar with my history and my work know that in 2008 our house burned down. I had, up until that time, maintained a busy and successful Real Estate career. It was a challenge, in a falling market, working with two other family members and a team of assistants, but it was a well-oiled machine that left us in the top 10 of just about every category in Northern California. I was proud of it.

When our fire occurred, it gave me the opportunity to do something else. Insurance gave us some living arrangements (a small one bedroom apartment), which I mainly stayed in by myself. Our property and house were an all-consuming job for my husband. Plus we had about 50 chickens, our Dobermans and “visits” by people who thought it was a good idea to help themselves to some of our things. He was doing battle with the insurance company, contractors and cleanup crew. All my clothes were either burned or affected by smoke.

Here are some scenes from the recent Wildfires in Santa Rosa. Not my house this time, but way more devastating.

I had a couple of choices. I could go replace everything, pretend nothing had happened and just resume my former business, or I could take a little time to sort out what exactly I wanted to do. We had to decide whether or not to rebuild the house, where we would live, what things we would throw away and what things we’d save for later sorting. My head was spinning.

Because I was alone with the apartment, next door to our office, I solved my lack of sleeping problem (too much to think about) with some late-night movies, and some reading. I did more reading than I’d previously done in years. I discovered Outlander and it got me hooked into good old fashioned storytelling. I even began an email dialog with Diana Gabaldon at one point.

Although very stressful, the fire actually became the catalyst for my writing career. I think opportunity comes from stresses that seem at the time to be overwhelming. Just like diamonds created by millions of years of pressure and heat from earth masses, the creative side of me, one that hadn’t been tested or expressed, began oozing out and I spent more time in my fantasyworld than I did on reality. I did it first out of self preservation. And then I began to do it because I felt it was my calling.

I wish I could say the process was clear, direct and in a straight line to success. Just like everything worthwhile in life, there are ups and downs. But, looking back, if I had to do it all over again: sacrifice some of my very precious things for a chance adventure into a new realm, or to wake up my fantasy world, I’d do it all over again. I really would.

Like the Phoenix, I emerged from the fire a completely different human being. I think about this these days as I drive past burned out homes and consider all the decisions and issues affecting people’s lives who have survived our horrible wildfire.

In a way, my house burning down was a blessing. I hope some of this will be the experience of some others this year. Terrible tragedy in most ways. But not all ways. There are some people who are going to be given choices they’d never really had before. And that’s where the rising, the magic comes.