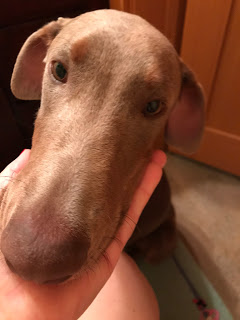 Who could resist this face? We visited with some people who were trying to care for this little orphan puppy, once loved, but the product of a divorce. My heart broke when I saw such a sweet dog having to live in an environment that isn’t healthy for Dobermans. They need a lot of affection, and a lot of connection to their humans. They are working dogs, so they need a place to run. The pup practically wouldn’t let me leave, and his behavior told me he was starved for affection. I knew we could give that affection and the right environment for him to heal.

When we left, I mentioned that if they needed a home for this darling, sweet tan Doberman, that we could provide a loving home. They of course had to check with the original owners, and the next day, they delivered this pup to our front door. He’s scared, very skinny, but has one of the sweetest temperaments I’ve ever seen in a dog. It’s a pure joy to see him running in our seven acre fenced yard, trying to keep up with the older dogs. He’s already faster than Rosa (who is a bit chunky and everyone mistakes her for a Chocolate Lab).

We named him Tucker, since he’s a Tan. Now we have a Blue, (Blue), a Red (Rosa), and a Tan (Tucker). Blue and Rosa are adjusting surprisingly well. Both of them are rather spoiled, so there have been some growling and boundary setting issues, but so far it’s been better than we expected. And he didn’t cry all night long. He can’t make it upstairs yet (probably never experienced them), nor does he know what a dog toy or a dog treat is.

He slept on a new bed I bought him with a fleece cover, and when I showed it to him, he lay right down on it like he understood. We have beds all over our house for the other dogs, but I wanted a fresh one without a scent to be his. My two older ones are delighted they can have the entire upstairs to themselves – their sanctuary. He doesn’t pee in the house either, which is the one phase of puppyhood I wasn’t looking forward to.

We think he’ll be big, as we estimate he’s about 5 months old. He goes to the vet this week for shots and a checkup. We’ll get a little meat on him, if we can, so we don’t see those ribs, which are painful to watch.

But what a joy, and a pure love. Next issue will be having him neutered, but one event at a time. We’ll let him get adjusted first. Then we’ll deal with his manhood issue. LOL. Rosa and Blue are both fixed. We want him to heal when he feels more confident in his surroundings.

We felt we saved this sweet dog’s life. Welcome to the family, Tucker.